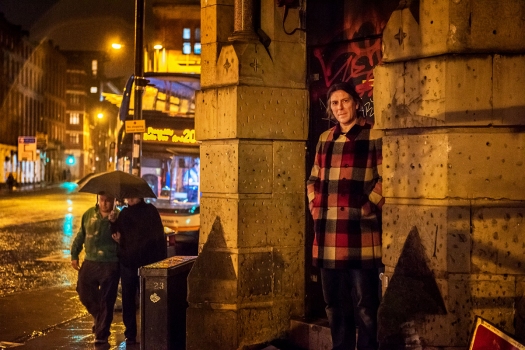 “Don’t worry young man. We’ll be back and winning stuff soon enough,” said that nice Mr Wilson off the television.

May 1979, and I had just returned from my first visit to Wembley. A chastening and eye-opening experience for my ten-year-old self. Said Mr Wilson was dating the daughter of a neighbour and was very much a class act in his low-slung sports car and suede tussled man bag. Way before man bags were even a thing.
The ten-year old me was blissfully unaware that the nice Mr Wilson off the television had a record label that had just released their first record. There was a lot I didn’t know.

Fast forward some ten years and I experienced another eye-opening experience. That nice Mr Wilson also had a nightclub. The Hacienda.
I was very much in the right place at very much the right time, and I was able to soak up all that Manchester had to offer. New Order going stratospheric. Spike Island. And so much more.
The Hac offered up some incendiary nights but I never felt quite at home. The tunes and atmosphere were life-affirming, but I never really took to the whole dancing all night vibe. Never have in all honesty.

I needed somewhere new. Somewhere that didn’t have two-hour queues and nutters waving guns about. And then in 1993, The Roadhouse opened its doors. A subterranean club that could easily be described as dingy. Or even a bit of a dive. Both aspects made it even more beautiful to me. Having recently started managing a friend’s band, this was to be my playground and said band would regularly pack out the venue. Some of the best times of my life. Hands down.
The band never made it. Falling between the two stools of Madchester and the musical explosion that was Oasis. But as I said, the greatest of times and many lifelong friends were made along the way.

Fast=forward more years than I’d probably care to admit to and I went to the inaugural Festival Number 6 and had a bit of an epiphany.
My writing exploits had previously extended to the odd bit of fanzine musings but nothing of any great substance.
Having had an idea for a novel kicking around for a while, I was now galvanised having seen John Niven talking about his music-based novel ‘Kill Your Friends’
I always felt that the fiction-based music novel could be done right, and Niven proved that to me. Now I wanted to prove that I could do it. My time spent managing the bands provided a lot of inspiration for the novel, but it is categorically not in any way autobiographical. You’d be bored to tears.

A few years hard work culminated in a finished product – working title at the time ‘In the Heart of the Hurricane’
The ‘book’ lay dormant for a further year or so and was my little secret.

January 10th 2016 something incredibly significant happened. I lost my job. And the devastating passing of David Bowie. I was way more concerned about the latter.
The whole world was rightly mourning whilst I went about dusting myself down and deciding what to do next.
This dusting down process lead to me opening my manuscript. And it was pretty decent. I was more than a little pleased with my efforts.

Excuse the dreadful pun, but long story short, I sent the opening to a writer friend of mine who gave some wonderful advice and mentoring which lead me to the first of several redrafts until I was happy and confident enough to announce that ‘The Rock ‘n’ The Roll’ ‘N That…’ was an actual thing.

A successful crowdfunding campaign resulted in sufficient funding to enable me to get the book professionally edited and then I was fortunate enough to secure publishing with an independent publishing house.

And here we are.

The book is entirely fictional with a sprinkling of embellished did they/didn’t they happen anecdotes.
I’m fiercely proud to have got to this stage and hope every single person who takes the time to read my novel enjoys it as much as I loved writing it.
Having got this far, I thoroughly intend to carry on my writing and would love nothing more than to be afforded the time to write without the distraction of full-time work.

Let’s see where it all goes…